When you serve your time, you pay your debt to society, and you are released from prison, shouldn't you have a fair shot at rebuilding your life? Many would say yes—that getting a job and having housing is crucial in making ex-convicts responsible contributors in modern society. Others, however, see any hint at assistance for these people as charity for criminals, something they say simply isn't right. 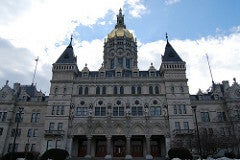 This week, Connecticut lawmakers in the state Sentencing Commission will hear arguments for helping those released from prison. They are considering a law that would ease the transition for those that once served time, back into society.

The new law, if passed, would develop a system of “certificates of rehabilitation”, certificates that ex-inmates could show to potential employers and others in order to try and get a fair shot at opportunities.

Employers and housing officials wouldn't be required to give housing or jobs to these people after seeing the certificate, merely to give them consideration.

For some, including Scott Bertrand of the Enfield Housing Authority, doesn't see a reason for the new law. He says housing officials already consider those with criminal backgrounds, but that their primary interest is in keeping residents (particularly the elderly and vulnerable) safe.

“I have fully paid my debt to society,” 62-year old New Haven resident Virginia Downing told lawmakers. “I have not had any criminal involvement in 14 years. It is not reasonable that I should continue to be burdened by collateral consequences.”

Downing has had consistent difficulties finding steady work and housing in the 14 years following her conviction for felony drug possession, a conviction she served six months in prison for, but continues to haunt her.

According to the Connecticut Post, last year 29 states changed laws and policies to reduce prison populations and help people recover after convictions. The Sentencing Project reports 13 million Americans have felony convictions on their records—convictions that could contribute to unemployment and recidivism in communities across states with policies like Connecticut's.

It isn't clear if the new law will pass lawmaker scrutiny, but there was a time such a law wouldn't have made it this far—so its mere presence is promising.

If you are facing criminal charges, the best way to avoid the consequences of a conviction is to avoid a conviction altogether. Contact our offices today to discuss the charges against you and how I might be able to help.