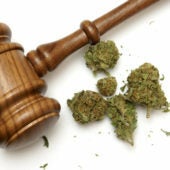 Erin Field is on your side if you have been charged with marijuana possession in the state of Connecticut.

Despite recent changes in the law, facing any marijuana possession charge is no small matter, and I know this is a stressful and difficult time for you. Although I'm sure you don't think of yourself as an accused criminal, the marijuana laws in Connecticut mean the courts may still see you this way.

New Connecticut marijuana laws mean that adults over 21 can legally possess up to 1.5 ounces of cannabis. However, despite this degree of marijuana criminalization, Connecticut pot laws can still screw up your future. Even if you only receive a ticket for pot possession, and even if it's not technically a crime, it can show up on a background check and damage your prospects if you don't deal with it properly.

As an experienced CT criminal defense attorney, I'm very familiar with Connecticut marijauna laws. Whether you're caught with a small amount of pot for personal use, or you're facing charges for carrying multiple pounds, I can help.

For an immediate phone consultation on any marijuana possession charge, please call me immediately. I answer my own phone, and I can talk to you right away.

If you are like most people and have never faced a criminal charge you are likely quite frightened⁠— and rightfully so. No one wants to pay fines, spend time in jail, or be labeled as a convicted criminal with a permanent criminal record. The consequences are many and not to be taken lightly.

When it seems as if everyone in the system is out to get you, I can help. I have successfully defended many clients against marijuana charges and want to to help you. Call me for a free legal consultation and case evaluation on a marijuana charge in Connecticut.

Do you need help dealing with Connecticut pot laws? Call me today at (860) 573-0700 to take advantage of my experience. I'll tell you how I've helped other people beat pot charges and what I think I can do for your case based on the circumstances.

Is Marijuana legal in Connecticut?

As of July 2021 possession of up to 1.5 ounces of Marijuana is legal for adults aged 21 and over, however over 1.5 ounces in public is not.

Can a Civil infraction for Breaking Marijuana Laws in Connecticut Show up on a Background Check?

Yes, it can. A civil penalty shouldn't matter, but if it's there for any employer to see, it can still prevent you from being hired.

That's why it is better to avoid just accepting the infraction. Don't just pay the fine⁠— contact me to consider how to keep the incident off your record.  I've assisted many people in doing this and can help you too.

Can I Beat a Marijuana Possession Charge?

Yes, there are many legal defense options to fight your case. I can challenge your arrest and the evidence collected against you on constitutional grounds. For example, you cannot be legally searched without certain due process elements being met.

On a first offense marijuana charge for a small amount of weed, there are a number of possible plea deals to consider that can completely avoid a permanent criminal record. For many people, that is the biggest deal. I don't want a conviction on my record to screw up any future opportunities for employers or anyone else who does a background check.

And even a civil infraction can show up on your record and prevent you from a job or other future opportunities.

But there are ways to keep your record clean, such as:

Connecticut marijuana possession laws can be complicated, but there are a number of possible options I can discuss to get you through this legal problem. Contact me today to find out exactly what I think would make sense in your situation based on how Connecticut pot laws apply to your case.

A 1st offense charge of Possession of Marijuana carries the following penalties under Connecticut Law if you are found guilty:

A 2nd offense charge of Possession of Marijuana is an even more serious felony charge. It carries the following penalties under Connecticut Marijuana Law if you are found guilty:

Yes, it is true that you can theoretically be sent to prison for a felony offense of barely half an ounce of weed if it isn't your first drug offense.

If the state prosecutor believes they can prove that you were selling the marijuana or if you were caught cultivating or growing marijuana, you can face some much harsher penalties, even under new Connecticut marijuana laws.  The way marijuana is packaged can determine whether the State calls you a marijuana user or a marijuana dealer, even for small amounts.

In addition to these harsh potential penalties, you could face additional time if the offense was committed on school property or if you attempted to sell to a minor.  Also, when the police are determining the amount of pot you've cultivated, they can cut down the entire plant and weigh it while it's fresh which is much heavier than after it is dried.

I know you deserve representation from an experienced criminal defense attorney who understands how Connecticut marijuana regulations work and how they apply to your case. Regardless of the circumstances, I want to help. I care about the specifics of your case; I want to know what happened, how it happened, and how I can support you.

If this is your first offense or if the charge is a minor possession charge I will fight to give you the best chance at dismissal or increase your chances of getting probation or less serious consequences. But I cannot help you deal with Connecticut cannabis laws until I hear from you. Call today for a consultation of your case.

Call me now for a consultation, and I'll let you know what I can do for you.