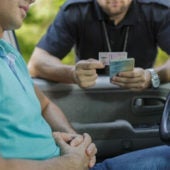 Erin Field is on your side if you have been charged with driving with a suspended license in the state of Connecticut.

If your Connecticut driver's license was suspended, no doubt you were inconvenienced in ways you didn't anticipate. And a criminal charge for driving on a suspended license has made your life even more difficult and stressful. But I can help. Call me to discuss your suspended license case today, for some advice from a lawyer experienced in dealing with suspended license issues.

Whatever happened that brought this about, I will protect your rights in court, and fight to work out an arrangement that you can live with. Perhaps an emergency came up and you didn't have alternative transportation. Maybe you had to be somewhere and thought you could get away with driving, just this once. Whatever the case, I am here to help.

Or you may not have even known your license was under suspension. This can happen for a variety of reasons, including moving, or a mistake by the DMV in notifying you of the suspension. If it wasn't your fault, we can absolutely challenge the court and fight to get your case dismissed.

I have handled many cases like this and probably one very similar to yours. I am an experienced defense lawyer prepared to fight on your behalf in the Connecticut criminal courts.

When it feels like no one is interested in your side of the story, you can rest assured that I am.

And you will know that within the first 5 minutes of talking to me.

For an immediate phone consultation on any driving with a suspended license charge, please call me immediately. I answer my own phone, and I can talk to you right away.

Driving on a Suspended License Laws in Connecticut

The likely penalties for this charge vary very much depending on the circumstances, and any previous criminal charges. I can discuss realistic penalties with you after discussing your situation. But people do get jail time for a suspended license charge.

In addition to possible jail time and fines, the judge can increase the suspension of your license.  If your license is suspended because of a DUI, you will be charged with a violation of CGS 14-215( c ) and will be faced with a 30 day mandatory minimum jail sentence.

How to defend a driving with a suspended license charge

Yes, there are legitimate defense strategies based on the reasons for the stop, as well as the possibility that your license should not have been suspended in the first place, and DMV errors.

When your license was originally suspended, life went on. Your responsibilities in the world and day to day living did not adjust to fit your suspension. It was you that had to make accommodations or other arrangements to fit the suspension. Sometimes those other arrangements fall through. I understand that you still have to function, go to work, drop off kids, get groceries, even after a suspended license, and that can be tough.

If you knew your license was suspended, and made a mistake thinking you wouldn't get caught, that is understandable. But I need to hear about the specifics of your case and want to help you work this out, and get the best possible outcome for you.

If you have been charged with driving with a suspended license, you should speak with an experienced attorney asap. I always answer my phone, so give me a call now for a free consultation to discuss your case and defense.