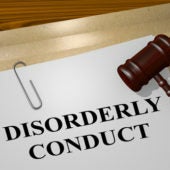 Erin Field is on your side if you have been charged with disorderly conduct in the state of Connecticut.

Disorderly Conduct is often charged by the police if they feel you are being disruptive or a nuisance to them. If you happen to annoy the police for any reason, they may arrest you and charge you, regardless of the legitimacy of the facts, and whether or not you were simply exercising your first amendment rights to free speech.

There are many other ways you may be charged with disorderly conduct, such as fighting or other disruptive behavior.

Call me for free legal defense consultation on a disorderly conduct charge in Connecticut. There are excellent defenses and it is usually possible to get the charges dismissed.

Any criminal charge is serious, and having a criminal record can affect you for the rest of your life, so it makes sense to find out if you can fight the charges and get a dismissal, and not have to worry about the future impact of even a minor misdemeanor criminal conviction.

For an immediate phone consultation on any disorderly conduct charge, please call me immediately. I answer my own phone, and I can talk to you right away.

As you can see, C.G.S  § 53a-182 is broad and can be vague. There is an important, but difficult, distinction between something that is annoying or alarming to someone, and this also can come into conflict with your constitutional rights to free speech.

Often, this statute is applied in a discriminatory manner. Your ‘attitude' might impact how a police offer feels about you or whether your actions are deserving of being charged as disorderly conduct.

The exception is in domestic violence. That is because the legislature has mandated that the police are required to make an arrest in every case where they find probable cause that a crime has been committed.

Penalties for Disorderly conduct in Connecticut

Under Connecticut criminal laws, Disorderly Conduct is a Class C Misdemeanor, which carries a maximum penalty of up to 3 months in jail, and a $500 fine.

How to Beat a Disorderly Conduct Charge in CT

The reasons for the charge vary widely, so there is no single defense I would use. It completely depends on the facts of the case, and what caused the police to arrest you.

Generally though, a disorderly conduct charge is largely a judgment call by the police. I will typically argue that a criminal charge is not warranted for the alleged behavior, and the charges should simply be dropped for lack of evidence of criminal behavior.

If you call me, I'll be able to go over the specifics of your particular case and tell you what I think the chances are that we can get your case dismissed. If you have been charged with disorderly conduct, you should speak with an experienced attorney asap. I always answer my phone, so give me a call now for a free consultation to discuss your case and defense.