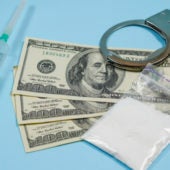 What to Expect After a Drug Arrest in West Hartford

At some point during this process you will be given the opportunity to contact and speak with a West Hartford criminal defense attorney. Your attorney will also speak to the police or the prosecutor. After discussing your case with you, you and your attorney may decide it is best for you to answer questions from the police or investigators.

How to Beat Your West Hartford Drug Charge

There are a wide variety of ways to fight and win a drug possession criminal case in West Hartford. A common successful tactic is to challenge the search and file a motion of illegal search and seizure. The police do not have the right to search your person, car or home without a warrant, or a reasonable suspicion that you might be in possession of illegal drugs. If they do so, the results of the search must be thrown out, and the case dismissed.

Contact Me for Legal Help After a West Hartford Drug Charge

If you've been arrested and charged with drug possession in West Hartford, contact me, Erin Field, for immediate assistance. Exercise your right to remain silent until you have consulted with me. Field Law Office, LLC has a 100% success rate for first-time offenders.