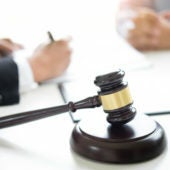 As an experienced West Hartford criminal defense lawyer, I know how confusing and frightening being arrested and charged can be. I am here to help walk you through the process and help you evaluate all of your options.

Please contact me today for a free consultation with an experienced West Hartford criminal defense lawyer before making any statements to the prosecution, or making any deal. If you don't, you'll never know if you got a fair offer, or if your case really should have been dismissed on legal, constitutional, or procedural grounds.

Any West Hartford criminal charge can be serious. Felony offenses frequently have mandatory jail time attached if you are convicted. Even misdemeanor offenses can carry jail time, driver's license suspensions, and will have other costly and difficult restrictions on your life and your future.

Violations and Infractions in West Hartford

And now that all criminal convictions in West Hartford are posted online publicly, your criminal record could easily become a scarlet letter that haunts you forever.

What to Do If You've Been Arrested in West Hartford

If you need to contact the police after an arrest or criminal charges in West Hartford, you can contact the local police department here:

During criminal proceedings you may need to be in court or contact the court in West Hartford for documents: