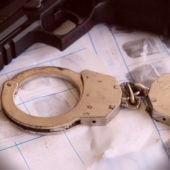 As an experience Enfield weapons chargers lawyer, I can help you understand the facts and myths about gun laws in Connecticut.

FAQs About Gun Ownership in Enfield

Charged with a Crime? Talk to an Enfield Gun Possession Lawyer Today

Even when they know the law and try to abide by it, people still sometimes face charges. If you've been charged with a weapons crime, contact me, Enfield criminal defense lawyer Erin Field, at Field Law Office, LLC, today.

I am passionate about standing up for the rights of those facing gun charges, and I will build a solid defense for you.  Contact me now!