Proposed Law Would Cement Your Right to Record CT Police 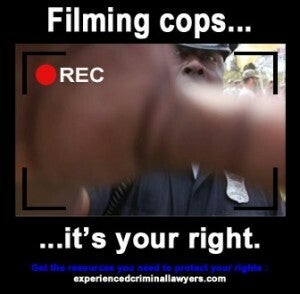 Most of us have a recording device on us at all times. With the prevalence of smart phones, we all have the potential to record some pretty damning (or vindicating) footage. And though we've come a long way since the grainy, VHS recording of Rodney King in 1991, police departments across the country are having a hard time with the new direction of things.

Several courts have ruled and officials have determined that police officers really don't have an expectation of privacy when they are working and in public. As a result, they can be recorded. Still, many can't wrap their heads around this.

In an effort to settle things on the matter once and for all, a bill has been introduced to the Connecticut General Assembly that would penalize officers if they try to interfere with someone recording them. While it has a ways to go before it becomes law (and it has failed in previous sessions), the bill would make it abundantly clear that citizens should be empowered to hold cops accountable with video footage.

According to the CT Post, the bill is before a Judiciary Committee awaiting vote. It would impose a civil fine against officers if they stopped or merely interfered with someone recording or trying to record them.

The bill isn't perfect and has several exceptions. Those exceptions say the officer couldn't be held liable if he was interfering because his actions were done in enforcing a criminal law, preserving the integrity of a crime scene, protecting public safety, or safeguarding someone's privacy.

With these broad exceptions, it's likely that an officer could find or make up a reason that would make his interference justifiable. Still, the bill would be significantly symbolic and would show police that lawmakers side with the public holding them accountable.

Why would anyone want to record the police? Wouldn't you be asking for trouble?

Depending on the situation, an officer could be threatened by your recording, true. And if he is, he could harass you about it or even arrest you for interfering with his public duties. But if that happened, there would have to be sufficient evidence to make the charges stick. Still, when choosing whether or not to record officers, this is something you'll have to weigh.

And people have been arrested for recording the police.

For most people, the choice to record police is a split second one, where they see something happening that shouldn't or they see the potential for police abuse of power. If you record police and if you are arrested, you have rights. When standing up for justice, you need to know that someone's got your back.

Contact our offices today if you are accused of a criminal offense, whether it's associated with recording the police or not. Let's talk about your legal options and how I may be able to help.